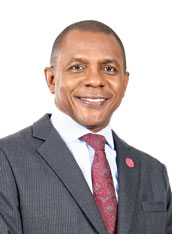 An accomplished and dynamic banking executive with over two decades of strategic leadership experience and a strong track record in business growth and improving general business performance, Mr. Courtney Campbell assumed the role of President and Chief Executive Officer of the Victoria Mutual Building Society (VMBS) on April 18, 2016.

Over the course of his career, Mr. Campbell has held several senior executive positions, including, Chief Executive Officer - GraceKennedy Financial Group, GraceKennedy’s financial services holding company with operations in banking, stock broking, insurance and money services across 12 Caribbean territories. Prior to joining the GraceKennedy Financial Group, he spent over 23 years with the National Commercial Bank, where he served in several management positions, including Head of the Retail Banking Division.

He holds a BSc in Management Studies from The University of the West Indies, and an MBA in Finance (Distinction) jointly awarded by the University of Wales & Manchester Business School. He is also a member of the Chartered Institute of Bankers, London.

Mr. Campbell is the Chairman of the United Church Mission Enterprise; a Corporate Champion for the UWI STAT, Mona Campus; Director on the Knox College Board and a Member of the Public Sector Transformation Oversight Committee. He also serves on the Investment Committee of the Council of World Missions. A Justice of the Peace, Mr. Campbell is an Advisory Board Member of the Governor-General’s Programme For Excellence and an I Believe Initiative Ambassador. He previously served as a Director of GraceKennedy Limited as well as a number of its subsidiaries’ boards and is a former Chairman of the National Education Trust (NET).

Courtney is married to Pauline and they have two sons.